Skip to Main Content
Ellie had her first baby and she’s proving to be one of the best moms we’ve ever had! She’s a gorgeous silver grey with fine fiber and lovely conformation. She’s a keeper. Her first baby, Princeton, is showing a lot of potential as a future herdsire. We’re very excited to see how he turns out. 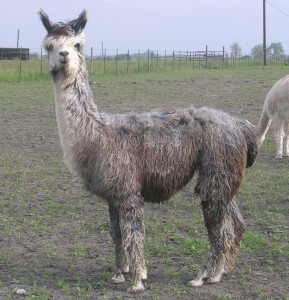 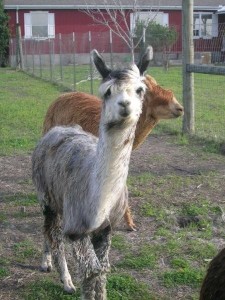 BlackHeart was entered in four shows as a juvenile in 2007 and placed 1st or 2nd each time, under four different judges, at mostly Level 5 and Level 4 shows! BlackHeart is sired by the amazing Bril (he is a 17.1 micron – at age 2 1/2 – Black & White suri, with 100% suri cria). BlackHeart has inherited his sire’s uniform fine twisted pencil locks and superb suri charter, and his dam’s LUSTER-LUSTER-LUSTER. His first fiber analysis came back at 20.4 AFD. At his third shearing in 2009 his micron is still an incredibly low 21.0 AFD, 5.8 SD. We are expecting BlackHeart to stay fine as his sire was 18.5 AFD at age 5 1/2! And at age 8 1/2 his sire made the NAAFP elite top fineness grade, under 20 microns. . . and this with BLACK GENETICS, not white! His dam is likewise very fine — her 9th fleece was still 20-22 microns!
Dam: LUNA ROSA’S ELITE Silver Expression

Silver Expression, “Xpress”, is an extremely striking Dark Silver Gray suri. She is out of an ultra-fine (20 micron – third shearing) silver suri dam and her sire is THE BLACK PRINCE, a rare true black son of Mahogany Prince (see him in our sold section). Her maternal grand-sire is the silver suri Virgo, the high selling male at the 2002 Alpacas of America Annual Production Sale. The fiber tests are back: an AWESOME 20.0 micron, sd 3.9; cv 19.6; fibers greater than 30 microns a mere 2.1% . . .AND SHE IS SILVER GRAY!!!!

“Ellie” is a beautiful lustrous medium silver gray girl we’ve added to our foundation herd.  Her silver dam and silver grand-dam are both exceptionally fine with lovely luster. Her sire’s line also holds their fineness.

Ellie is a full fourth generation Suri, something we actively looked for since it’s hard to find this much pedigree in a silver gray.

Her pedigree is full of the major herdsires of every generation: Mahogany Prince (twice Herdsire of the Year and highest selling suri EVER at $325,000), Cantano (famous high selling son of Peruvian Meteor), Peruvian Fuego (one of the early impact sires), Alpacas of America’s famous Black Debut, Wilkins’ Fruzane Noir, Andy Tillman’s Highlander, Virgo – the high selling male in the 2002 AOA production sale.

With her pedigree, fiber, appealing conformation, and super adorable face- she’ll be our core foundation girl for a long time. Her crias will be available in time.